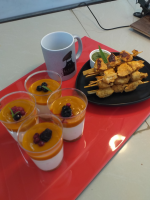 Nikuman are steamed pork buns sold on streets of Japan during winter months. The white fluffy buns are made with flour dough and filled with savory pork and onions, steamed on bamboo steamer make them an ideal quick and easy snacks. crepe fine et legere recettes.

Provided by: Benjamin and Koshiki

These Japanese style pork belly buns are a real treat. The pork is flavoured with Asian spices and dashi, before being served with hoisin sauce and cucumber.